Today I have a card I created using  Susan’s Garden Club Columbine, Beauty Berry Bush and Garden Notes Love In A Mist along with Spellbinders Vintage Treasures by Becca Feeken.

Card base is 6″ X 6″ created from 110# Cardstock then embossed front.  The embossing folder was found on Amazon.

Background piece was from my stash and die cut with the frame lit in Vintage Treasures die set.

From white cardstock Vintage Treasures was die cut background was attached to back of main die cut using Kids Choice Glue.  Dimensional tape was used to adhere to card front.

Once flowers were where I wanted them they were attached using Kids Choice Glue.

Hope my card has inspired you to create.  Thanks for Stopping by.

Until next time – Happy Crafting!

You only live once if you live right once is enough!

Just a quick post today.  Today I have 3 sympathy cards I created using some of Susan’s Garden Notes dies.  I have not done tutorials but they are very simple to do.  Because sympathy cards are usually not a planned thing it helps if you have a few flowers ahead so a card can be created in a timely manner.  These cards all have the Garden Notes Love In A Mist which I love to make.

Card 1 has a background paper that I made myself by printing off a picture I had taken of old wallpaper.

Card 2  the colorful oval was done with coffee filter and powder water colors.

Thanks for stopping by and until next time – Happy Crafting! 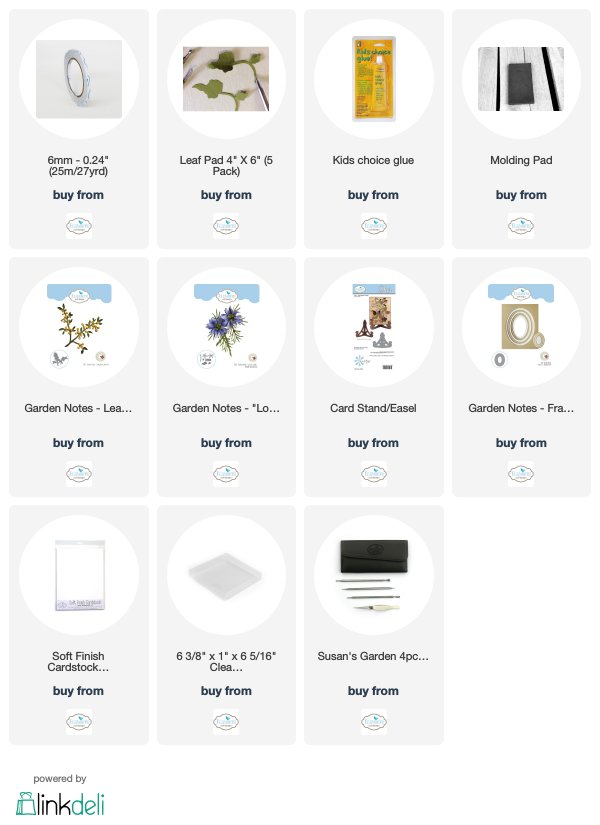